Take A Back Road

Take a Back Road

I love tourists.  I can easily spot them walking down the street in .  The signs are all there:  way too comfortable shoes (a.k.a. not boots or converse), the over-the-shoulder purse (women do use these here, but it’s while they’re riding their bikes), a nervous spring to their step, if you’re lucky, a fanny pack. Yes, I’ve seen them, which begs the question – do they still sell fanny packs or has that man been hoarding that fanny pack in his closet since 1987?  I don’t know.  But I love them all because I see them trying to nonchalantly review the map on the street corners while their children keep watch for the imaginary ruffians around.  I want to run over to them, point them in the right direction, and really make their day.  They are the only people in this city less familiar with all the inner-workings of everything than me.  I did help a lost Canadian once.  She walked up to me and asked if I spoke English, I happily replied “I do!” with probably a little too much enthusiasm.  She was in the train station parking lot, but she didn’t know it and was wondering where the train station was.   So, that was an easy question to answer.  See? I’m knowledgeable.
After incorporating many of the lessons learned while traveling in , my family took a road trip to for a long weekend in June.  Driving in the car was heavenly after the fiasco of the Thalys train to .  As the highway stretched before me with fields aligning each side, I could almost imagine us driving down I-35.  To further complete the road-trip experience, we stopped off at a Texaco to fill the tank and grab lunch.  We feasted on made-to-order sandwiches of freshly baked bread, grilled chicken, and crisp vegetables.  It was kind of like Subway, if only Subway had a real bakery and a garden growing out back.  The drive was only 2 ½ hours and as we approached the town, the sun started to shine with a warmth we had not encountered this year.   Although the air was still crisp outside, its rays warmed the car to the point we had to turn on the A/C.  Happiness is the first time (not the 100th time, like most of my friends in the are doing right now) you turn on the A/C of your car after a long winter.   We pulled off the highway and started viewing close-encounters with dairy cows.  I raised an eyebrow to my husband (the GPS has led us down questionable paths before – including instructions such as “board ferry”).  But I decided to trust it and sat back to enjoy the small country two-lane road it directed us down.
We had rented a gardenhome in the center of Bruges.  After passing by a small suburban-like neighborhood complete with an Aldi grocery store, we discovered the hidden jewel that is .

“When the headquarters of the moved from to Antwerp at the end of the 15th century, many merchants followed, leaving abandoned houses, deserted streets and empty canals. Bruges, a former hub of Europe, slept for 400 years.  The city slowly emerged from its slumber in the early 19th century as tourists passed through en route to the battlefield near Brussels. In 1892 Belgian writer and poet Georges Rodenbach published Bruges-la-Morte ( the Dead), a novel that beguilingly described the town’s forlorn air and alerted the well-heeled to its preserved charm. Curious, wealthy visitors brought much-needed money into , and sealed its fate as a town frozen in time.”
Read more: Lonely Planet


After centuries, is still walled off from the world.  After curiously taking cues from the cars in front of us, we drove over the moat and through a large fortress-like gate into the town.  We maneuvered the car down the tiny cobblestone streets and to our surprise, were able to easily find parking on the street.  The streets were seemingly abandoned as we unloaded the car.   My husband retrieved the house-owner’s instructions from the front door of her house and our family inquisitively walked around the block, found the walled garden in the back and unlocked door.  Just like a secret garden, we were transported back in time and after tromping through the overgrown grasses, we found our tiny, but adequate garden home and entered.   The house was built in the 18th century and the original stone fireplace still stood.  It’s funny how the mind works.  In a world of unfamiliar, my mind will often stretch to grasp the familiar in ways it may not normally reach so far.  As we played house in a garden home built centuries ago, I felt a tug on my mind.  The home reminded me of my grandmother’s home in and the connection took a few days to pin-point: the floor was a rust-colored stone.  The living room in my grandma’s house was a rust-colored brick.  Despite the fact that she covered the brick with wall-to-wall carpeting when I was in elementary school, the memory still lingered in long-forgotten file cabinet of my mind.  It just took an ancient house in to dust it off and recall it. 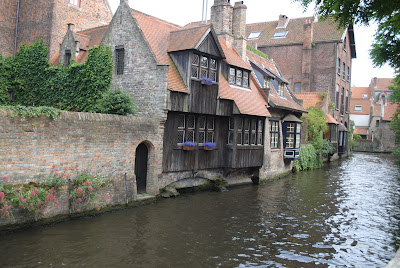 All the guidebooks I had read described the town as an ideal backdrop for a fairytale.  Walking through the town the next day, I would agree that Disney must have stolen the scenery for Rapunzel’s and Belle’s trips through town from .  But beyond the architecture, reminded me of in many other ways.  The primary modes of transportation were your feet, carriage rides, and boat rides through tiny picturesque canals.  As we meandered through the streets, it did not feel as if any ‘real’ people lived there.  Even the lady who owned the house we stayed in seemed more like a ‘cast member’ than a real resident.  When she wasn’t bringing us breakfast, she was giving tours through the city.  Everywhere you looked people were glancing at maps, speaking English, and taking photos.  If you don’t like tourists, this is not the place for you.  Since we’ve been living here, I found it extremely comforting.  It was a quaint little town, small enough to see everything by walking, like in .  It has lots of history, some great sights, a few manageable museums, and great food.   It wasn’t so overwhelming in that I didn’t feel guilty for taking a nap with my daughter on Saturday, while my over-excited husband and son wandered the town square and had a bottle.  (V: beer, Baby: milk, of course).
is proud of their fries, beer, chocolate, and waffles which is a recipe for some good old-fashioned family fun.  Something for everyone, right?!   There are some nice restaurants and a brewery in and I would suggest checking out those sights if you are in town without children or at least with children old enough successfully enjoy evening hours between and bedtime. We were not, so we opted for the, let’s-buy-a-variety-of-Belgian-beers-at-the-store-and drink-them-in-our-garden-home-after-the-kids-are-asleep-option.  It may sound boring, but it wasn’t.  It was relaxing, which, I think, it what is all about.
We took a canal ride and giggled as baby ducks were playfully swimming/being run over by the current created from the boat.  We had Italian and Egyptian take-out.  We took video of our daughter dancing in the Markt.  We shushed our children as we breathed in the peacefulness of the only remaining almshouse community in the city.   We ate Belgian chocolates in the shape of letters in front of ancient churches with the bells ringing.  Our favorite stop though, was the French Fry (Friets) museum.  Beyond zoos and aquariums, there are few museums which can catch the interest of a two year old, but French Fries are on the list.  We learned about the origin of the potato, the development of it as staple crop during the famines of the 1770s, and how they cook fries in .  It’s a two-step process which involves beef and horse fat (it was enough information to spoil my appetite, I’d rather not know what fats they use to cook the potatoes in The Netherlands – ignorance is bliss).
Late Monday afternoon after a full day of sightseeing, we loaded the car and pressed the Go Home button on the GPS.  Happy and satisfied with the weekend adventure (without too much adventure), we queued up the Big Spring Texas Road Trip play-list I had created last fall.  As we passed though Belgian and Dutch towns and farms, both kids slept soundly, and I turned to my husband and smiled.  After months of pretending to be a resident in The Netherlands, casting ourselves in the role of Tourist from , is just an easier part to play.