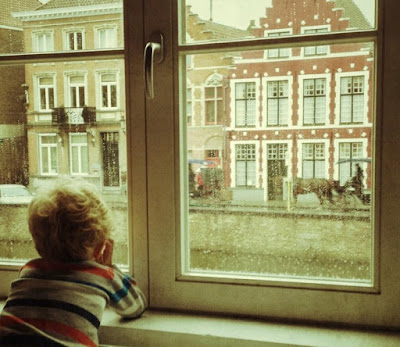 The sun has beat upon Texas for months.  Last Wednesday, I awoke to the sound of raindrops on my windowpane, like kisses from heaven.  Little Man, Holden rushes into our bedroom at 6:30 a.m.  "Holden!  It's raining!" I smile into the darkness.

"Let me show you," and I scoop him up into my arms.  I unlock and step out the front door.  We stand on the porch, sheltered from the drops.  The parched, Texas ground sips the water falling from the sky.  He squints into the early morning light and listens - I see his memory racing towards something familiar.  His eyes widen, smile stretches, and face glows.  "Mama!" he whispers, "It's a beautiful day in America!"

The move was hardest on Holden. Cosette, at five years old, misses her friends terribly, but she understands the move.  She remembered my parents, our friends, our visits to Texas. She's sad about leaving the Netherlands, and can express it. We talk about our memories of Europe. We appreciate the happy things in Texas. Holden, who was three months when we moved to the Netherlands and three years when we moved back, didn't know what had happened.  All he knew was that we moved him away from his entire life – his home, his friends, his school, his teachers, his museums, his grocery store, his parks, and his playgrounds.  For the boy who resists change in his daily routine, this was a very bad thing.  Our first month back, we were housed in a corporate apartment while we fixed up our house and waited for our furniture to arrive from the Netherlands. We were used to staying in apartments in Europe during our travels – and I did our best to make it fun. I had never been a full-time Mom in America (much less with three kids), and after V went back to work in Dallas on the third week – I tried to imitate our daily routine in the Netherlands as best I could.  We took walks – in the sun and in the snow. We listened to Dutch SkyRadio on an iPhone app and had dance parties.  The majority of our toys were in the sea shipment still in transit, so I went to the Dollar Store and bought workbooks, puzzles, and art supplies.  But by day three of being full-time-mom-of-3-in-Corporate-Apartment-in-America, I could tell I was dealing with a completely different challenge than. . . all of the above.  Holden had become the most difficult version of himself – a screaming, angry, mess. Before 9:00 a.m.,  I called my husband with tears brimming at my eyes – "Let's call the local preschool. I hope if he's enrolled in school, he'll calm down – it won't be the same, but maybe it will help."  Meanwhile, that afternoon, I held him before nap time. He was inconsolable, a loose cannon in the apartment, ready to explode.  I rocked him and sighed. There are few words you can utter to a three year old that stick. But I had to try. "Holden, I know you're upset. I know you're sad. You miss your friends, our old house, your school, our Jumbo, and the museums. But I want you to know – that we're all the same.  Our family is still here – me, you, Daddy, Cosette, Baby Brecht, Tyler, & Dash – we're all here.  And we're together.  And that's what's important." His three-year-old eyes looked at me and blinked. I stare back.  For a silent moment, he seems to understand.  He too, takes a deep breath, and the tension in his body collapses. I lower him into his travel crib, and shut the door quietly.

Two days later, our family tours the preschool. It's in the church I grew up in, just a mile from our house. The director is warm and friendly. I explain our background and how we've just moved back from overseas.  As we explore the details of the school, I become increasingly confused until I begin to feel like an expat in my own country. Before we left for the Netherlands, Cosette was enrolled in daycare while I worked full-time – so I know about the importance of labeling, making your own bottles, and the strict security procedures.  But preschool in America was unfamiliar territory.  In the Netherlands – I signed one permission slip upon registration that stated – you can take Holden wherever you like.  I'd pick him up from school and they would have been to the market, the local farm, or the playground.  It was easy – the teachers loaded the children in strollers and walked all over town. The school provided all snacks, lunches, and diapers.  I'd pick him up everyday and talk to his teachers - "Ja! Hij slaapt goed, ate goed!" There were no boo-boo grams or documentation about his BMs.  And I was really okay with this.

As we go through the tour, the director tells me I need to provide a nap mat.  "A what?" I ask her. "A nap mat." she repeats.  I've never heard of such a thing, much less owned one.
"Okay – sounds great.  I'm sorry, but where could I get one?" I ask.

Accustomed to specific stores carrying specific inventory, I press further. "No really – where can I find this thing?"

"Target – or perhaps Buy Buy Baby."  Okay.  This is helpful.  I purchase one the next day.  And a lunchbox.

A few days later, we drop Holden off for his first day of American Preschool.  I've signed about thirty forms, given a blood sample (not really, but. . . ) and have his labeled change of clothes, nap mat, and have packed his lunch.  Everything goes in a separate bin, and he walks into his classroom with a fearless attitude.  I'm nervous, but proud. I mean – we've lived overseas! American preschool at a church I've attended for 30 years should be cake.  Then I get a phone call.

"I'm afraid I forgot to mention this during the tour – but we're a peanut-free and nut-free school," she explains.

I cock my head into the phone.  I'm really confused. "I'm sorry. What did you say?" I respond.

"I'm not sure if you encountered this in the Netherlands. . . ." she takes the acknowledgement approach, "but here we're a peanut-free school," she repeats.
My mind is dancing over peanut knowledge gained over the past three years. . . FB posts about peanut-free Halloween candy? And that's really about it.  Are they afraid Holden is going to share his sandwich?  That's terribly unlikely.

She reads my mind, "I don't believe anyone in his class is allergic, but the peanut allergy could be triggered via the air."

Now I'm stunned. "Really?  In The AIR?" I exclaim with a mix of disbelief and amazement.
"Oh yes," she retorts.  "I think you'll find a lot of schools around here will have similar policies. . . "

I feel like I'm completely out of date.  Not only have I stumbled upon an advanced strain of allergy intolerance, but I've also learned that the Great American PB&J has become offensive.  I press end call and shrug.

The next few weeks, I continue to embarrass myself at his preschool.  After living in a biking culture for three years, my kids are still learning about parking lots and I'm still learning how to corral three kids to and from the car. We pick Holden up from school – baby in the stroller and Cosette holding onto the side.  I sign him out, and he takes off down the hallway.  Another Mom opens the glass doors. Holden squeezes past her daughter, through the door, and shoots down the sidewalk, towards the parking lot. I panic. I race after him, screaming his name, while pushing the stroller as Cosette runs to keep up.  Holden barrels towards the road when he takes a sudden turn down the adjacent sidewalk.  The Mom stands stunned, probably amazed at the speed of my child and at the volume of my shrill voice shouting his name.  I grab Holden and tell him (for the 400th time in three weeks) about the importance of parking lots and staying with me.  The other Mom, still mortified at the scene before her and her role as the tipping point, shakes her head and repeats a stream of apologies.  With my head and heart fluttering, I try my best to console her, "Don't worry – he's used to being yelled at!"  Nice. Real. Nice.

Throughout the following months, I realized Holden had created his own defense mechanism.  When he'd talk about his old school he'd say, the name of it, "Far away." or "Eiffel Tower. Far away."  He'd still ask me if we could go to our friends' houses or the museums. But it was less frequent.  Far. Away.

After a summer off, Holden recently started preschool again. "Mama – I so nervous for school," he'd say. But once we arrived – he didn't want to leave.  I attended the back-to-school-night and all the rules and regulations and suggestions for efficiency and convenience made my head spin – but like Holden, I was happy to start a new year, with a few familiar faces.

Last night, before we ate dinner, the kids suggested we pray before we ate, just like Holden does at his new preschool. We held hands together and recited "God is great, God is good. . . " After we concluded, Holden's eyes sparkled.  "Okay. Now we sing, Smakelijk eten!" - the song he sang at his old Dutch school before him and his classmates ate a meal.  Together as a family, we sang the Dutch song. Pleased with our rendition, Holden picked up his fork and smiled, "Smakelijk eten allemaal!"